Katarina Schwarz and Professor Jean Allain hosted a two-day event on 29 and 30 June 2016, From the Transatlantic Slave Trade to Engaging the Maangamizi, in collaboration with David Archard, leader of an Arts and Humanities Research Council Care for the Future Exploratory Award entitled ‘Generating Justice: The social, legal, political and ethical issues of ensuring justice across generations’. 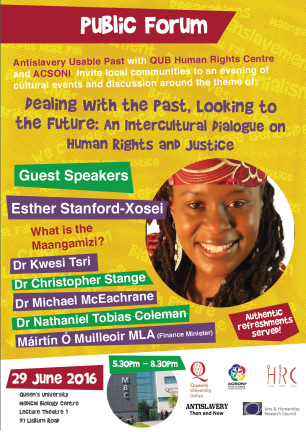 The first day of the event featured a Public Forum, an Intercultural Dialogue on Human Rights and Justice co-hosted with the African and Caribbean Support Network of Northern Ireland (ACSONI) entitled Dealing with the Past, Looking to the Future. A pre-Conference Workshop, Historical Injustice and Reparations, took place on the second day, co-hosted by Dr Jeremy Watkins from Queens University Belfast and coinciding with the Royal Institute of Philosophy’s Annual Conference of the Society of Applied Philosophy held in Belfast.

The Public Forum focused on community engagement, working with ACSONI to reach out to the local African and Caribbean communities as well as the broader public (see pictures). Scholar activists, academics, and public officials from across the UK and Ireland were brought together to discuss research, activism, and policy with the participants. Presenters engaged with the feedback, questions, and views of the public, creating multilateral discourse. Irish experiences of colonialism and anti-imperialism were acknowledged, building solidarity between people of African descent in Northern Ireland and the Irish Catholic community. This solidarity was recognised as being crucial to dealing with racial violence and discrimination within Northern Ireland. 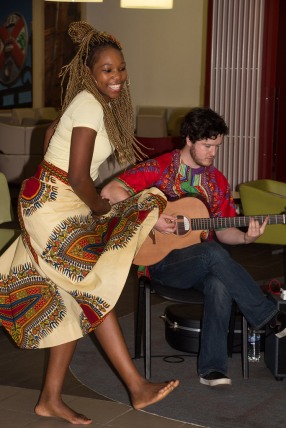 The Public Forum was framed around the question ‘what is the Maangamizi?’ introducing a concept developed by scholar-activists of African descent into both public and academic discourse. The Maangamizi – the African holocaust of chattel, colonial, and neo-colonial enslavement perpetrated by Europeans and their prodigy – is a term central to many reparations and justice movements seeking to address the suffering of people of African descent. Guest speakers included reparationist, advocate and radio broadcaster Esther Stanford-Xosei, Dr Nathaniel Tobias Coleman, Dr Kwesi Tsri, Dr Christopher Stange (Hon. Consul for St Vincent and the Grenadines to Northern Ireland), Minister of Finance Mairtin O’Muilleor MLA, Michael McEachrane, and Elly Odhiambo.

The pre-Conference Workshop sought to settle the Maangamizi into the academic discourse through constructive dialogue between mainstream academics, scholar activists, and representatives from the Public Forum. Participants presented academic papers on issues relating to intergenerational justice and repair, with particular consideration of the place of marginalised communities and persons within their research. The importance of engaging with the voices of those people was consistently highlighted, and the ideas and language of activist communities was discussed and incorporated into the scholarship. 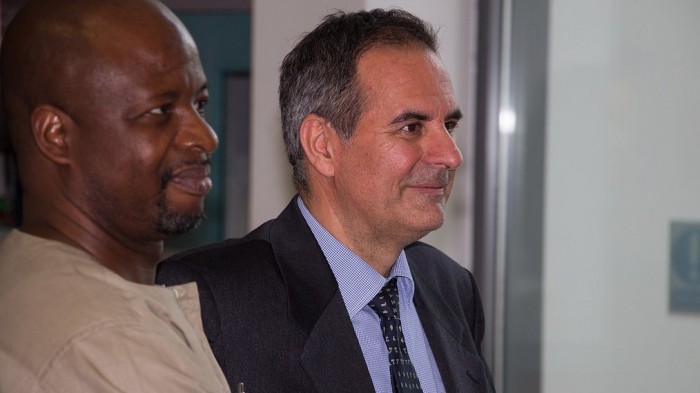 Rather than simply seeking to disseminate information to the public, this two day event promoted active engagement of both the public, activists, and academics, enriching the academic discourse through consideration of concepts developed by scholar-activists. The Forum also helped to engage a broader audience with issues associated with the past, whilst respecting for the voices of marginalised persons and their contributions. The event created a unique opportunity for the development of networks including academics, scholar-activists, activists, public officials and members of local communities.

The Event Programme is available here.