Hannah Jeffery is a 3rd year Ph.D. student at the University of Nottingham. She completed a BA Hons in American Studies at the University of Nottingham and the University of Illinois at Urbana-Champaign, and completed an MRes in American Studies at the University of Nottingham where she wrote on the cultural memorialisation of Black Panther leader, Fred Hampton. Funded by the AHRC’s Anti-Slavery Usable Past Studentship, her thesis unpacks the intersections between art, radical black memory and space by examining why murals are an enduring and unique cultural form used throughout the Black Freedom Struggle, from the Harlem Renaissance to Black Power to #BlackLivesMatter. She is the creator of ‘Murals: Walls of Slavery, Walls of Freedom’ (www.antislavery.ac.uk/murals) – a constantly growing digital archive that brings together, for the first time, U.S. murals connected to themes of abolition, slavery, Black Power, black protest and resistance. She has written about murals of the #BlackLivesMatter movement, as well as contemporary slavery murals worldwide, and she currently has an exhibition of Frederick Douglass murals on display at the Boston Museum of African American History. She has also given lectures and seminars on black muralism, slavery, the Black Power Movement and African American visual culture. 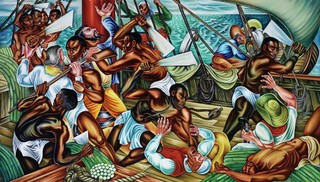 Before 1967, no African American murals textured the streets of the US. Yet by the mid-1970s, depictions of prominent abolitionists and contemporaneous activists adorned the walls of black communities. For the first time in history, the faces of Frederick Douglass, Nathaniel Turner, Sojourner Truth, Harriet Tubman, and self-emancipating enslaved figures lined the streets of cities like New York, Chicago, Boston, Detroit, St Louis, Philadelphia and Los Angeles.

African American murals are understudied in scholarship, and this thesis inserts them into a narrative of public art and protest measures of the Black Freedom Struggle, unpacking why the mural is an enduring cultural form, and what makes it unique. It focuses on the intersection of art and history to explain their emergence in the streets after 1967 by answering aesthetic, cultural and socio-historic questions surrounding memory and protest, such as: why does it take until the Black Power Movement for the US to see visualisations of the radical black past in the streets for the first time? Why are murals the chosen cultural form to depict radical narratives of the anti-slavery past? How does the radical black past speak to the Black Power Movement? and why does the Black Power Movement use the urban environment differently to any preceding racial movement in its quest towards black liberation?

This is the first comprehensive socio-cultural history of African American murals. Starting with the Harlem Renaissance, it focuses predominantly on the 1960s to redefine our understanding of the Black Power Movement, and by concentrating on cultural, as opposed to ideological, distinctions of Black Power from previous movements, this thesis joins a scholarly canon that debunks the common misconception of Black Power as the Civil Rights Movement’s “evil twin”.

Unpacking the relationship between space and historical memory at the heart of African American murals, this thesis examines the forces shaping the exteriorisation of mural art, moving from interior murals of the Harlem Renaissance and WPA era through to street murals of the Black Power Movement. It analyses the emergence of an empowering black memory that unofficially visualises figures of black history omitted from public memory. By tracing a lineage of African American murals to evaluate the marriage between socio-cultural history, space and historical memory, this thesis addresses why empowering murals related to slavery and liberation did not emerge in black communities until the late 1960s. Each thesis chapter answers this question by considering a web of socio-cultural reasons, and by interrogating the relationship between memory, space and art, this thesis places murals into the cultural narrative of the Black Freedom Struggle to reframe our understanding of historical black memory and the uses of African American artwork.

Curator of ‘Murals: Walls of Slavery, Walls of Freedom’ for Antislavery Usable Past, antislavery.ac.uk

Hannah has built the first archive of all known US-based murals about slavery, abolition and antislavery. The purpose of the archive is to show how murals have long been protest tools to tell forgotten antislavery stories. The archive highlights lessons we can learn from historic antislavery murals and teaches us how to apply these lessons to mural making today in order to raise awareness of contemporary slavery and human trafficking. She has written a book chapter on how the lessons of these historic murals can be applied to the canon of contemporary antislavery murals in order to raise awareness of contemporary slavery, and highlight slavery-free cities. The archive is also being used as an educational tool for undergraduate and postgraduate study, as well as non-governmental organisations.

Contributor to exhibition, Picturing Frederick Douglass: The Most Photographed American of the 19th Century, the Museum of African American History, Boston maah.org/exhibits.htm

Whilst this exhibit focuses on how Frederick Douglass reinvented himself using photography as a tool of reform, Hannah curated the exhibition titled “Frederick Douglass Murals” displayed on second floor, to highlight how Douglass’ historical memory and visual legacy have endured throughout the 20th century, being recuperated at prominent periods of black history for protest and fights for civil rights. She also created interactive touch screen displays for visitors to navigate through Douglass murals around the US.

Hannah assisted in the creation of Nottingham’s first Black History Mural, painted in Hyson Green. She ran workshop sessions with young people from the community (ages 15-21) on the history and purpose of murals, and taught muralists and New Art Exchange staff members on the history of community mural movements, as well as the value of murals in strengthening community relationships.

Jeffery, Hannah, and Hannah-Rose Murray, “A Colossal Work of Art”: Antislavery Methods of Visual Protest From 1845 to 2017” Journal of Modern Slavery (forthcoming, 2019)

Jeffery, Hannah, “‘I am not for sale, I AM PRICELESS”: Antislavery Visual Protest Then and Now” in Using History (Berkeley: University of California Press, 2019)

Jeffery, Hannah, ‘These voices continue to speak to us’: A New Age of Muralism in the Era of #BlackLivesMatter” in Black Lives Matter: The Past, Present, and Future of an International Movement for Rights and Justice (Oxford: Oxford University Press, 2019)