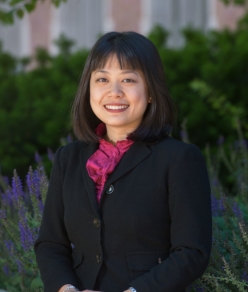 Jing Geng is a Ph.D. researcher at Católica Global School of Law and the recipient of a competitive scholarship funded by the Foundation for Science and Technology (FCT) in Portugal. She is also affiliated with the Católica Research Centre for the Future of the Law, at Universidade Católica Portuguesa. She is a former EU-US Atlantis Program Grant Recipient and a graduate of the Transnational Law Program at Washington University School of Law, having earned her J.D. from Washington University in 2011 and an LL.M. in Public International Law cum laude from Utrecht University in 2012. From 2012-2013, Jing was the Harris Institute Fellow at the Whitney R. Harris World Law Institute, conducting research in crimes against humanity. From 2013-2015, she served as a judicial law clerk to the Honorable Camille R. McMullen of the Tennessee Court of Criminal Appeals. Jing’s research interests include international human rights, women’s rights, gender equality, human trafficking, and migration. She is licensed to practice law in New York and Tennessee.

The Search for the “Perfect Victim”: Impact on Efforts to Combat Trafficking and to Aid Exploited Individuals

My research explores the issue of consent and victim-blaming in the context of trafficking prosecutions in the U.S. and the Netherlands. I have furthered my research as a Grotius Scholar at the University of Michigan Law School and at the International Victimology Institute Tilburg (INTERVICT) at Tilburg Law School in the Netherlands. My hypothesis is that the rate of prosecution of perpetrators is shockingly low in part because victims are not being identified as such; instead they are perceived as criminals complicit in their own abuse. A focus on a “perfect” victim is problematic for two reasons; it means that “imperfect” agentic victims are deemed undeserving of legal protection and that certain victims of trafficking are rendered altogether invisible. The intent of my research is to shift the anti-trafficking discourse from victim consent to exploitation and to expand narrowly constructed notions of “victimhood.”

J Geng, ‘The Legality of Foreign Military Activities in the Exclusive Economic Zone Under UNCLOS,’ Utrecht Journal of International and European Law (2012).